So, the exciting thing is that I have completed the entire script. It has been in outline form and the ideas have been swimming around in my head since I was a teenager, but it is quite a milestone to have finished it. I have shared the drafts with an illustrator and with some friends, and I am looking forward to getting it out into the world.  The most recent version of the story is consciously influenced by Russian fairy tales, which in the past years I have really fallen in love with. Aside from some unsubtle references to popular stories (the rumor that Wilfred has iron teeth for example), the realist themes of Russian storytelling are firmly cemented throughout the work. The entire story and illustrations should be concluded by January or February at this rate, and it will be wonderful to share with people.

I am going with the same style seen in Phantasy Star IV for cutscenes. This is the format ironically that I used for my own bad art for many years ago, in high school, making the first version of this game. 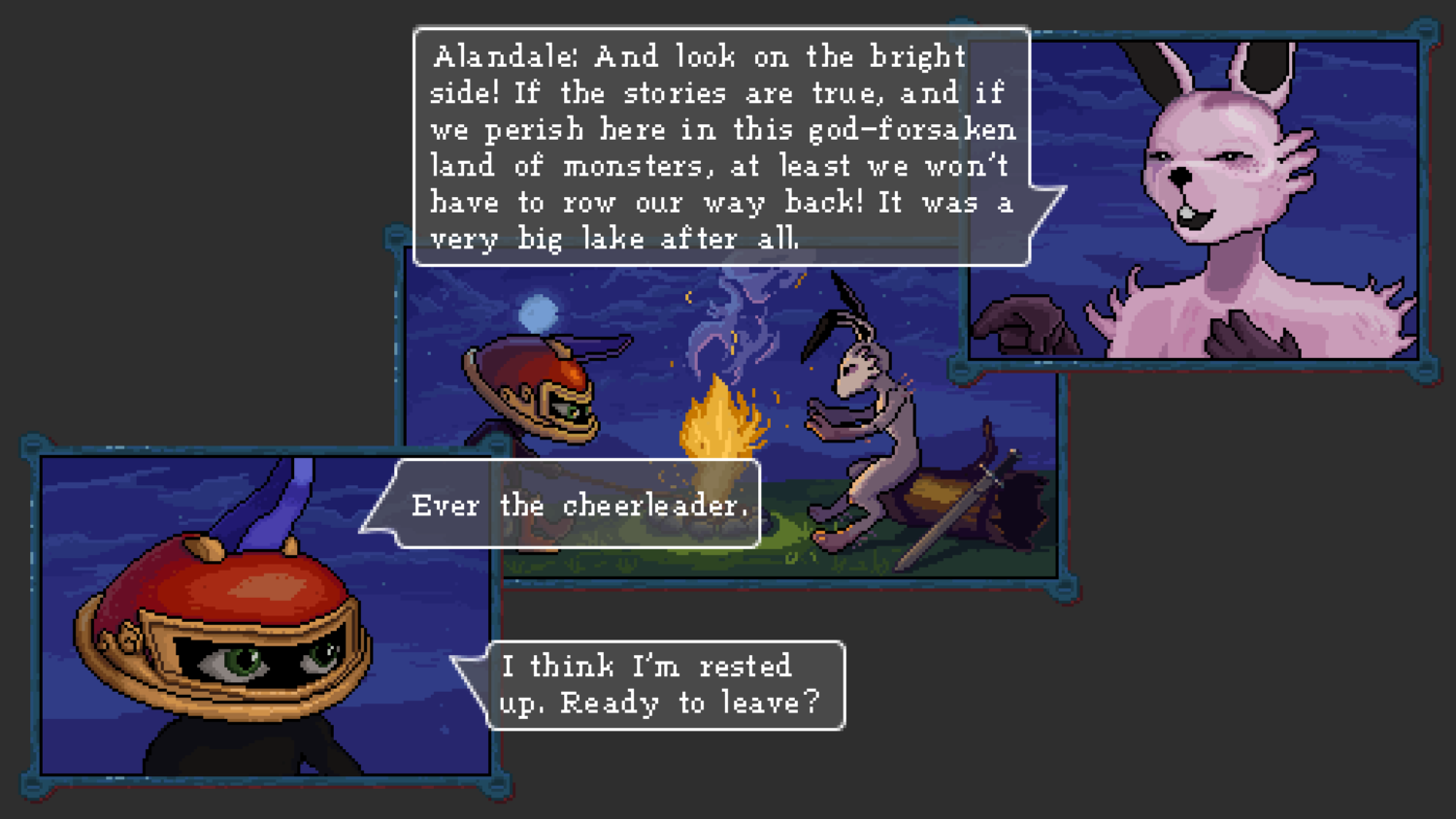 In service of this, I’ve partnered with Artem Parkinsun to do the cutscene art. So far we’ve been working together wonderfully. He shares the same enthusiasm for Slavic folklore as I do, which could very well be a natural consequence of his living in Russia. I was kind of pleasantly to surprised to find this out, as it was after I had already scouted his art and hired him, but I guess that is a sign. You can view his other work on Artstation: https://www.artstation.com/artparkinsun

Something I intended from the beginning was for this version to be a platformer, with running, jumping, climbing and swimming to make the environments more interesting. Another less conventional design mechanic I have included is bullet hell scenarios. Maybe a little unusual for an RPG, but I really like. You can see a video below:

You can also see most of the navigation mechanics are settled at this point. It needs a lot of polish, but that comes later!

Nearly all of the assets are completed; I would say about 98% or 99% by end of the month. Most of the assets are original but some things, like spell effects, some vegetation and other things are largely assembled from things I’ve picked up on asset stores. This is another key milestone–aside from a few sprites and make a few weapon models for variety, I just have to slog through making the content. I am touching up some music; I won’t re-record every track, but a few will sound substantially different than what I released a few years ago.

I spent the first parts of the pandemic extremely depressed and not really doing much other than working. This was a tremendous waste of time and life that I will just never get back. These last months though I’ve felt quite inspired, and I plan to take full advantage of an isolated winter with quite a lot of free time to try and bring this thing past the finish line.

Thanksgiving in Kyrgyzstan I Went to Pennsylvania