About Wilfred the Hero

Wilfred the hero is a game that I have been working on in various iterations for about 15 years, at some points in partnership with artist Teo Mathlein. I have a dream to finish it someday, but at this point, I am being realistic about my prospects. It is currently in its fourth iteration. This page contains some historical information about those efforts for posterity.

The story follows Wilfred, a famous hero, and his squire Alanadale, his partner and source of emotional support, in their journey to slay The Dragon. Every hero before them has failed to succeed in this mission, and Wilfred is terrified that he will fail, knowing that, despite his fame, he’s not particularly a special person. Along the way the heroes are supported by an enigmatic traveling salesonion named Mr. Onion. They are stymied along the way by the evil witch Streganona and her monster, Stregoneria; the witch seems more keen on tormenting the heroes than in actually killing them, and the monster is conspicuously reluctant to harm the heroes but most follow the orders of its master. They also are confronted by Josef, a hero that is long supposed to have disappeared, but not all is as it seems . . . and his squire is not with him.

The concept was to take the scope of what is normally a very ambitious final dungeon to an RPG, and stretch that out into an entire game. The story largely explores topics like depression and how relationships between two people can become extremely toxic when they depend on each other too much. It has also evolved over the years as I have thought about it as well. It’s all wrapped around this goofy fantasy environment of course, and straightforward fairytale premise.

I completed the soundtrack for Wilfred the Hero a very long time ago. You can listen to it on most major platforms as I published it through a label service, but I recommend either Spotify or Soundcloud. It is some of the musical work I am most proud of. 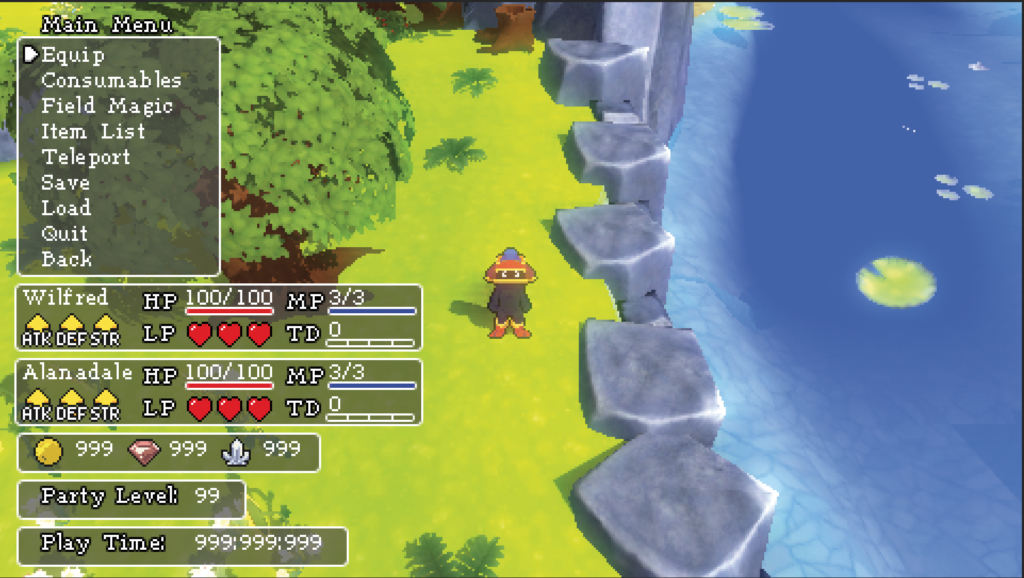 This is the current iteration of the game. I’ve scaled back to a psuedo-Playstation style with the graphics; this was originally per Teo’s advice. It exists right now as a basic prototype with some platforming. More info forthcoming, hopefully. I am not presently working with Teo on this iteration, though I will be using the work that he prepared for the previous version. This remains a noncommercial project at present.

In 2011 I got the insane idea to make Wilfred the Hero as a full 3D game with no practical game development experience outside of RPGMaker. I spent about $10,000 and thousands of hours of work, and eventually, ended up giving up a couple of years later.

It was just a completely ridiculous prospect that I would create this Playstation 2/3-quality game almost entirely by myself, with Teo doing 3D modeling for the characters and props and textures, and putting pretty much everything else on myself, especially given that I had no experience or qualifications whatsoever to do so in Unity.

What we ended up with was a very rough game that produced some nice screenshots but ran very badly and would take me another 10 years to complete working at the pace I was, which was about 30 hours per week. I would say more than half of the game was complete in some form or another. I remained quite committed to it through 2011-2013 until some particularly devastating events happened to me in my personal life. I put work aside temporarily, and as these things go, I never got back to it.

It wasn’t a total waste however, as I did learn quite a lot. By the end of this exercise I considered myself a qualified Unity game developer and had reasonable competence in 3D modeling, animation, worldbuilding and programming. I was even able to parlay this experience into some professional game development work. I plan to reuse all of these assets for the current iteration of the game.

There was a very early build of the battle system I posted once, but I no longer have access to it and no interest in issuing a new one or tracking the file down (if something was on the internet at one tine, it will surely be on the internet forever, somewhere). The metadata in the Unity project in the backup I maintained is ruined; lesson learned and please read up on using Google Drive sync to backup Unity projects if you decide to go that route. For all intents and purposes the project files are completely ruined, except for, most importantly, the assets and media.

I do have two early videos I recorded. however. These were recorded far before I gave up on the project and represent a quite early version. Unfortunately, the world will never see the work as it stood at its best. See them below.

This project started when Teo reached out to me and suggested that we enter an RPGMaker 2003 contest together. I jumped at the opportunity, having loved his Sunset Over Imdahl game and being a fan of his art. I had been working on some game prototypes starring this hero Wilfred with a goofy red helmet and one of his sidekicks was a pink rabbit. Teo wanted to run with the idea. We did not win the contest, but decided to keep working on the game. We finished Part 1 of 3.

It is now just an interesting relic of my youth, but it was a big part of my life and something I will forever be associated with. If nothing else, the record should that froggits appeared in Wilfred the Hero in 2005. 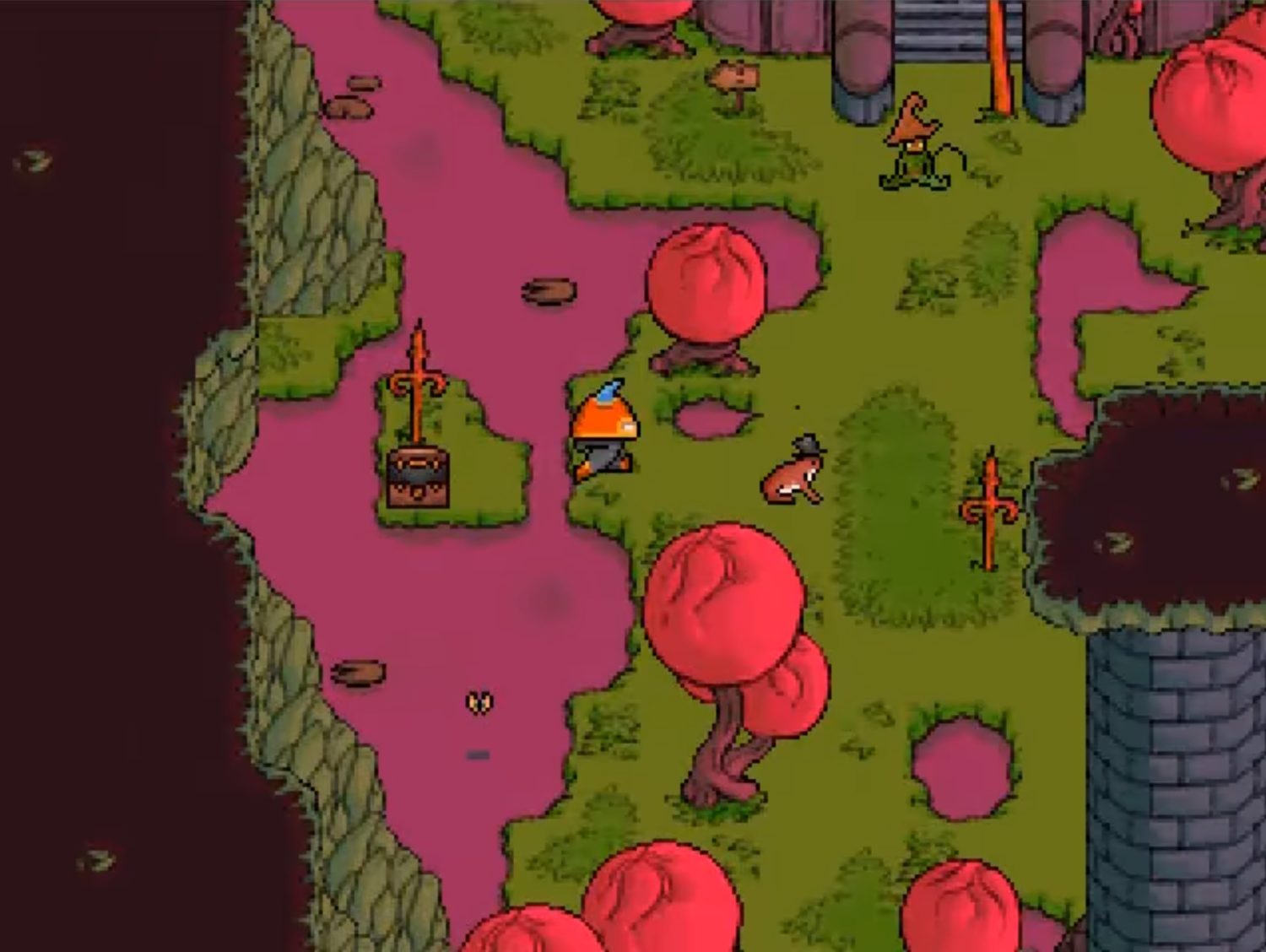 The game was fairly popular at the time, and though I did not have any meaningful metrics, I am confident that tens of thousands or even a hundred thousand or more people have played it. It was shared around the internet and included in some demo disks in European gaming magazines. It is now listed on a number of retro and abandonware sites. Indie game development at the time was a much different thing than it is now, and I was very proud of the reception.

It was a strange time to be an indie game developer back then however; the term “indie developer” did not even exist as a broad concept at the time, and much of the indie community was making flash games and Newgrounds was still king. In my case, I was part of a community surrounding a very clumsy game development suite called RPGMaker. The formation of this community is a long story, and largely begins with a the personal project of a Russian hacker who went by the alias “Don Miguel”, but that’s a separate history for another day. Though I find it amusing now that it is a legitimate product, given the origins of the RPGmaker English-language community.

Most RPGMaker games tended to use assets ripped from Super Nintendo games with modest edits, or in some cases royalty-free assets from Japan. Within the RPGMaker community, it was extremely rare for games to feature quite good original art and music as Wilfred the Hero did. Outside of the RPGMaker community, the style probably just struck people as quaint and nostalgic.

It is also not a stretch to say that Wilfred the Hero is quite technically impressive for an RPGMaker game. RPGMaker 2003 provides a basic template for a Super Nintendo-style RPG, including a battle system, menu system, a dialog system etc. It is designed to make it easy to make a game in the style of Final Fantasy 5 or 6. However, we would not have our game use the standard gameplay mechanics. We needed to develop our own systems. However, RPGMaker 2003 does not have a proper scripting engine like later iterations do, and the concept of doing “programming” is only done through a point-and-click logic system with ridiculous constraints like completely lacking the concept of an object and very limited ability to do math. If I recall correctly, there were no floating points and everything had to be a signed integer. 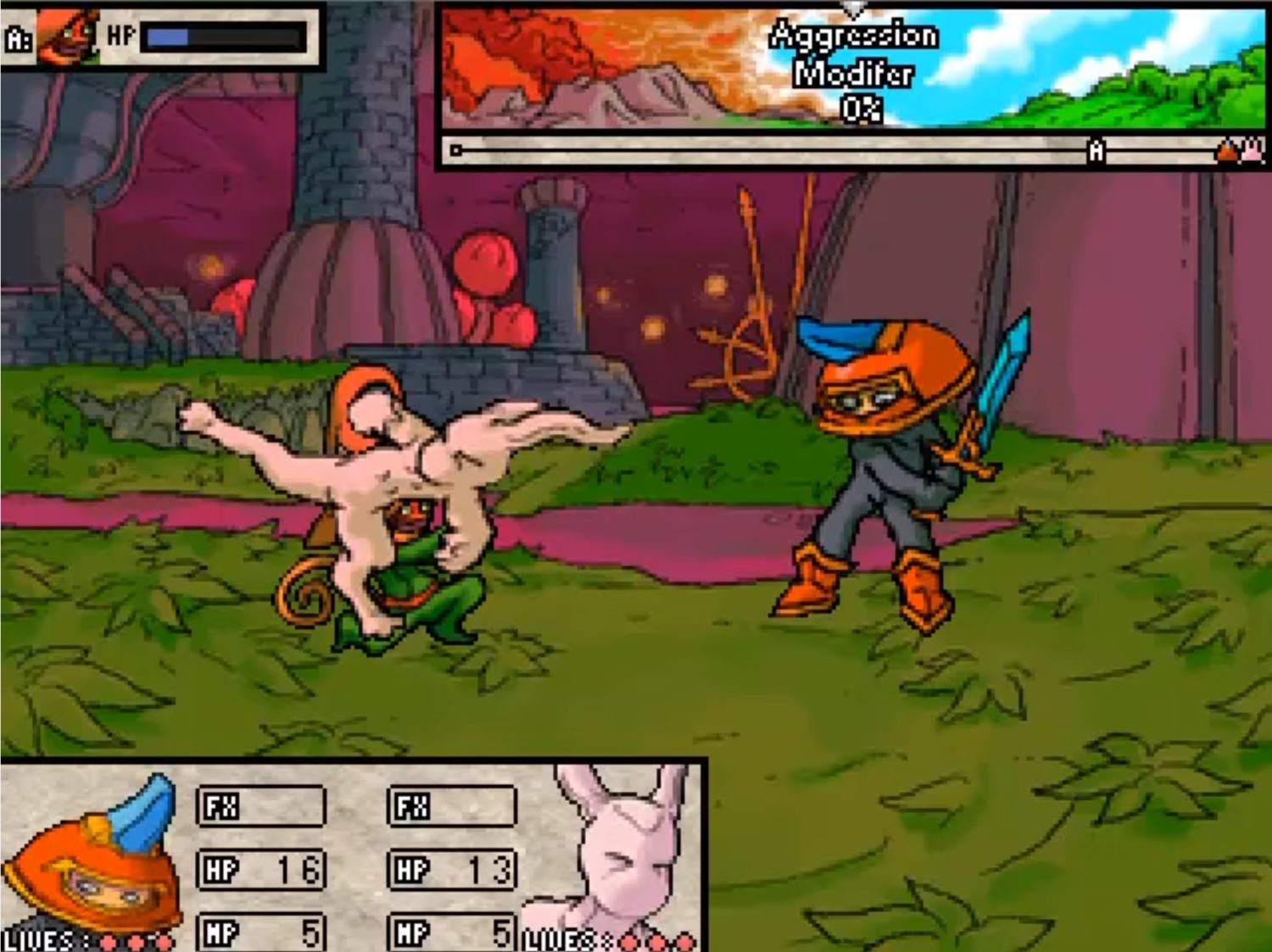 For example, within this extremely limited framework I had to develop my own text system by building logic that would load a given PNG file to show a letter on screen, because there was no way to display text in an arbitrary manner. These files were all just letters and and numbers. I also built a sprite and animation system that worked by showing pictures on screen, but it had no concept of a sprite object and was hardware locked at 10 frames per second. Within these same limitations I had to do things like build enemy AI. Looking back, we should have just used a real game engine and learned how to code, but we were young and didn’t know any better. Given how limited the tools are, I’d say it is technically the most impressive programming I’ve ever done. But it is also by far the most stupid.

Since the game predates the concept of Let’s Plays or watching other people playing video games on the internet in general, there isn’t much video of it. However, I did find a couple of hits on youtube. Courtesy of RMN:

This is one of the first real music projects I ever completed, which I worked on in spurts from 2003-2005. I recorded all of the music in FruityLoops, the predecessor to FL Studio, which was software intended to make dance music. At the time I could not even read music. So all of this classical music is actually sequenced as layers of loops on an interface that looks like a DJ controller. Again, I was young and didn’t know any better. You can listen to it on Soundcloud.

Keeping in mind we were almost literally children when we made this, if you would like to try it, find a download link below. I did not even have a copy; I had to dig this up on an abandonware site.

I give no assurances for unsigned code from a Japanese video game development suite that was unofficially translated into English by Russian hackers 20 years ago and intended to run on Windows 98. Download at your own risk.

Download Wilfred the Hero 2005
I went to Mongolia One Day in Narita, Japan